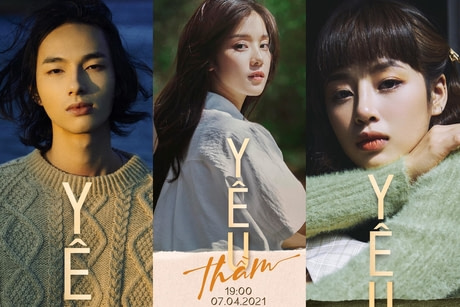 On April 7, Hoang Yen Chibi officially released the MV Silent Love after many days of ‘dripping information’, which attracted a lot of attention.

The singer born in 1995 said that combining with Gen Z rappers like Tlinh gives her excitement and inspiration with music.

Secret love is a ballad written exclusively by Ly Ly for Hoang Yen Chibi. Listening to the title of the song, many people will surely imagine the prospect of a girl who has a secret crush on a boy but dare not say it, then suffers, cries softly, and sadly …

The content of the MV is as light as the song itself, revolving around the story of three close friends. Hoang Yen Chibi plays the role of a girl who secretly loves the only boyfriend in the group. She fantasized about a good, happy future with him. But she realizes that her boyfriend’s attitude and feelings are not for her. She accepts to leave with a calm attitude.

Neither saying it nor taking action to win it, she actively left, keeping her pure feelings of love… Although she did not have love, she never fell into a state of grief. Through the end, the audience still feels optimism, pure love, no calculation or self-interest …

Hoang Yen Chibi said she enjoyed the rap in the song. Working with a young Gen Z rapper like Tlinh with Hoang Yen Chibi is both interesting and inspires her to music. She hopes the handshake will be supported by many people.

At the end of the MV, the music part also has the harmony of TDK. He is also the producer of this secret love project. Each song between three people intertwined creates a piece of emotional music.