24.3k
views
ShareTweetSubcribe
Sharing is caring It's the biggest motivation to help us to make the site better.

Five members of the American group brought to the music space full of fire in the live in the capital of Thailand, 21/9.
For the first time in Thailand, Ryan Tedder shared his surprise with the passion of the audience. Ryan Tedder diverts his attention to the Thai audience when he learns many Thai words to exchange and continually compliments the food of this country.
Bangkok is one of the Asian destinations of the group, next to Hong Kong and Japan. Many spectators from neighboring countries and regions were present to enjoy, prompting the boys to express “this is one of the most emotional stops”. 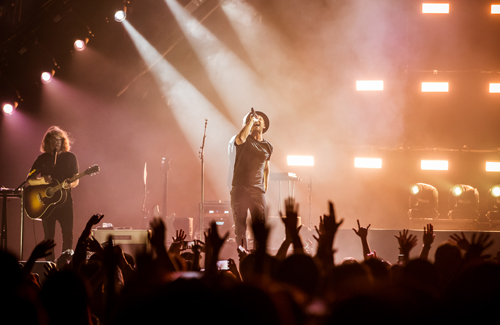 The stage is simple and full of light.

Starting at 20:30, One Republic members opened with Stop & Stare, receiving immediate accolades from 10,000 audience members. During two hours of nonstop performance, the group brought in 20 songs filled with blood and fire. At times, the audience singing the familiar songs such as Secrets, Apologize, Halo, Happier …, sometimes screaming along the passion of Ryan Tedder on stage. He plays the piano, plays the guitar and often runs across the stage.
The concert was simply decorated, with only musical instruments and band members. Everything visual stimulation is not used, so the audience just focus on listening to music. The Counting Stars moment was shot up, most of the audience automatically turned on the phone, creating a blurry space, like a starry sky surrounding the boys.
[brid video=”165827″ player=”8559″ title=””Counting Stars” One Republic”]
One Republic – “Counting Stars”
As Ryan Tedder shared the show, the song Apologize was released 10 years ago but still shows intense vitality and is indispensable work on the stage of the group. According to Billboard, Apologize is considered one of the top 10 songs of the 2000s. One Republic is one of the rare groups that have existed for more than 10 years, featuring pop rock. This tour of the group to promote Oh My My album.
At the end of the show, Ryan Tedder revealed they are recording their fifth album, due out next year. The group then went on to say, “No doubt, this is the most enthusiastic audience in the summer. Thank you Bangkok again.
[brid video=”165828″ player=”8559″ title=””Apologize” One Republic”]
One Republic – “Apologize”
Thai Viet, an audience from Vietnam to Thailand to enjoy music night, shared: “I can not forget the moment the audience raised the phone and sing Apologize. It is a way of showing affection both warmly and deeply. I am very fortunate to be present at my favorite band’s performance since student time”.
After Bangkok, the next destination for the tour is Tokyo, Japan. One Republic will wrap up their Asia tour on September 27th in Shanghai, China.
24.3k
views
ShareTweetSubcribe
Sharing is caring It's the biggest motivation to help us to make the site better.
Share