40.4k
views
ShareTweetSubcribe
Sharing is caring It's the biggest motivation to help us to make the site better.

ĐÀ NẴNG — France’s Féerie team took audiences on an adventure around France on a ‘friendship train’ through their fireworks performance on the second night of the 2018 Đà Nẵng International Fireworks Festival on Saturday.
Meanwhile, Atlas PyroVision from the US created a ‘painting of lighting’ in the sky of Đà Nẵng with their 20-minute performance and 6,000 fireworks.
The US team impressed the audience on the Hàn River bank with the ‘film of time’ performance with music from the 1940s and 50s and amazing fireworks.
While Féerie told a story of bridges spanning over the Seine River, the US team depicted the Brooklyn Bridge in a dynamic and modern style.
The two teams lit up the second night, with lively stories told using fireworks and magic light.
Italy and Hong Kong (China) perform on June 2nd, while Sweden and Portugal will light up the night of June 9th. 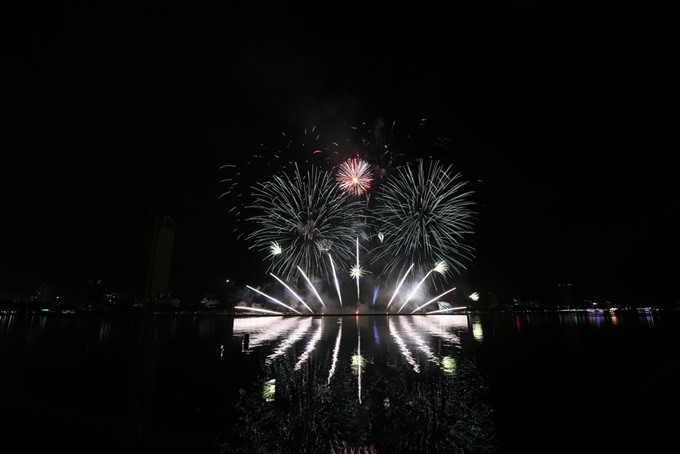 France’s Féerie team show off their ‘friendship train’ through romantic and artistic fireworks performance in Đà Nẵng on May 26th. — Photo courtesy of DIFF

The fireworks festival, which began in 2008, has drawn the participation of eight teams from France, the US, Italy, Hong Kong (China), Sweden, Portugal, Poland and Việt Nam.
Việt Nam and Poland performed on the opening night of April 30th.
The festival has promoted the city as a must-see destination in central Việt Nam
This year’s theme is ‘The Legend of Bridges’, with each team showing off the beauty of bridges from their home countries.
Last year, Italy’s Martarello team won the title after a spectacular performance on the Hàn River.
It was the third time an Italian team won the contest, with the Parente team winning in 2011 and 2012.
In 2013, the US team Melrose Pyrotechnics took first spot. Canada’s Davis Whysall took the top prize in 2008, while China’s Liuyang Dancing won in 2009. France’s Jacques Couturier Organisation won in 2010. — VNS
https://www.facebook.com/100025043175845/videos/170082687169836/
40.4k
views
ShareTweetSubcribe
Sharing is caring It's the biggest motivation to help us to make the site better.
Share