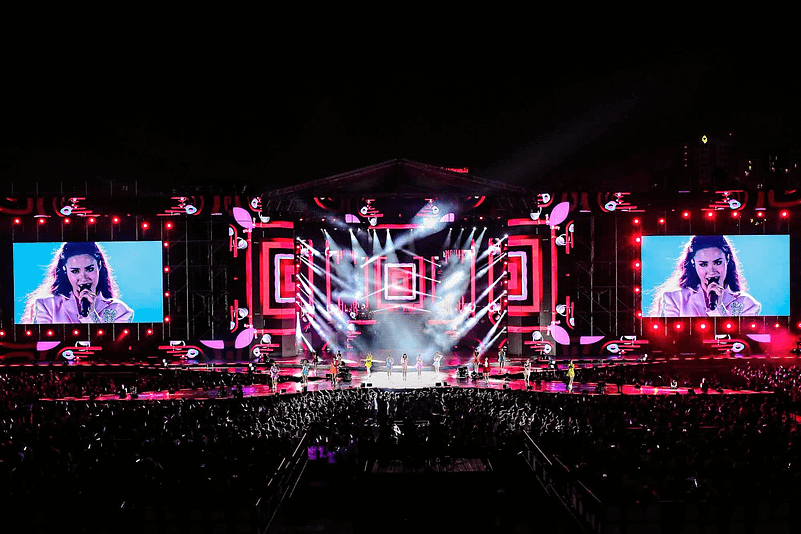 On December 22, the concert “TEN ON TEN” – the last project in Dong Nhi’s 10th anniversary singing series was officially held at SVĐ Quân Khu 7, TP. HCM. Alone to show more than 30 songs, female singers overwhelmed audiences when constantly changing the image right on stage.
What made the first impression with the audience was the stage of the live show “TEN ON TEN” with a length of 100m, height of 18m and the area of ​​the performance field was 1200m2, Dong Nhi ‘s stage performance this time was recorded as one of the largest performing stages in Vietnam ever. From early on, a large number of Dong Nhi fans gathered outside to participate in activities and lined up to enter the stadium soon to take a nice position to follow the show. 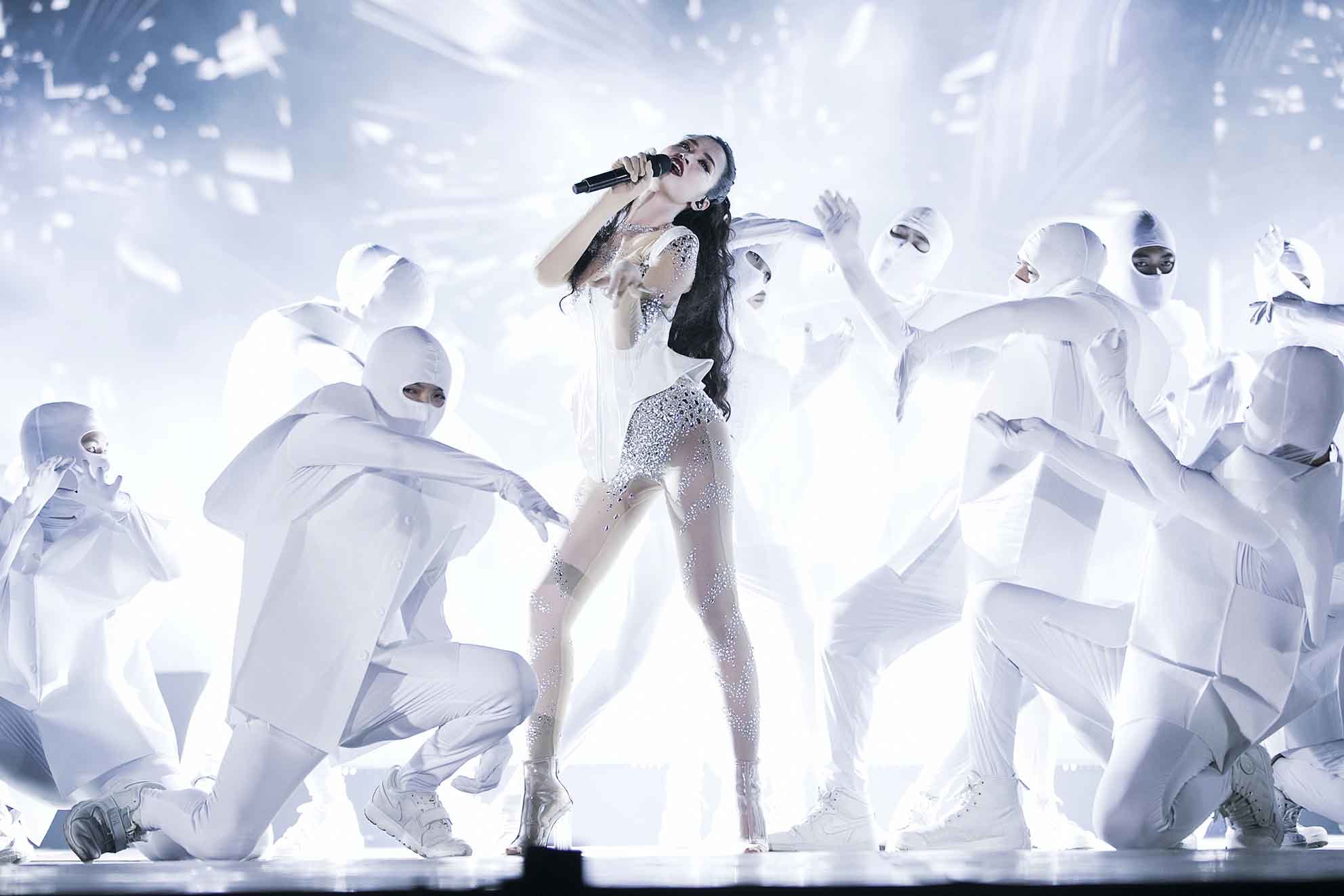 The opening performance is elaborately staged with a little future direction when the white costume dancers are designed fussy, Dong Nhi appears in shaping mutant creatures with the tail that the female singer has announced on. poster of “Ten On Ten” project. 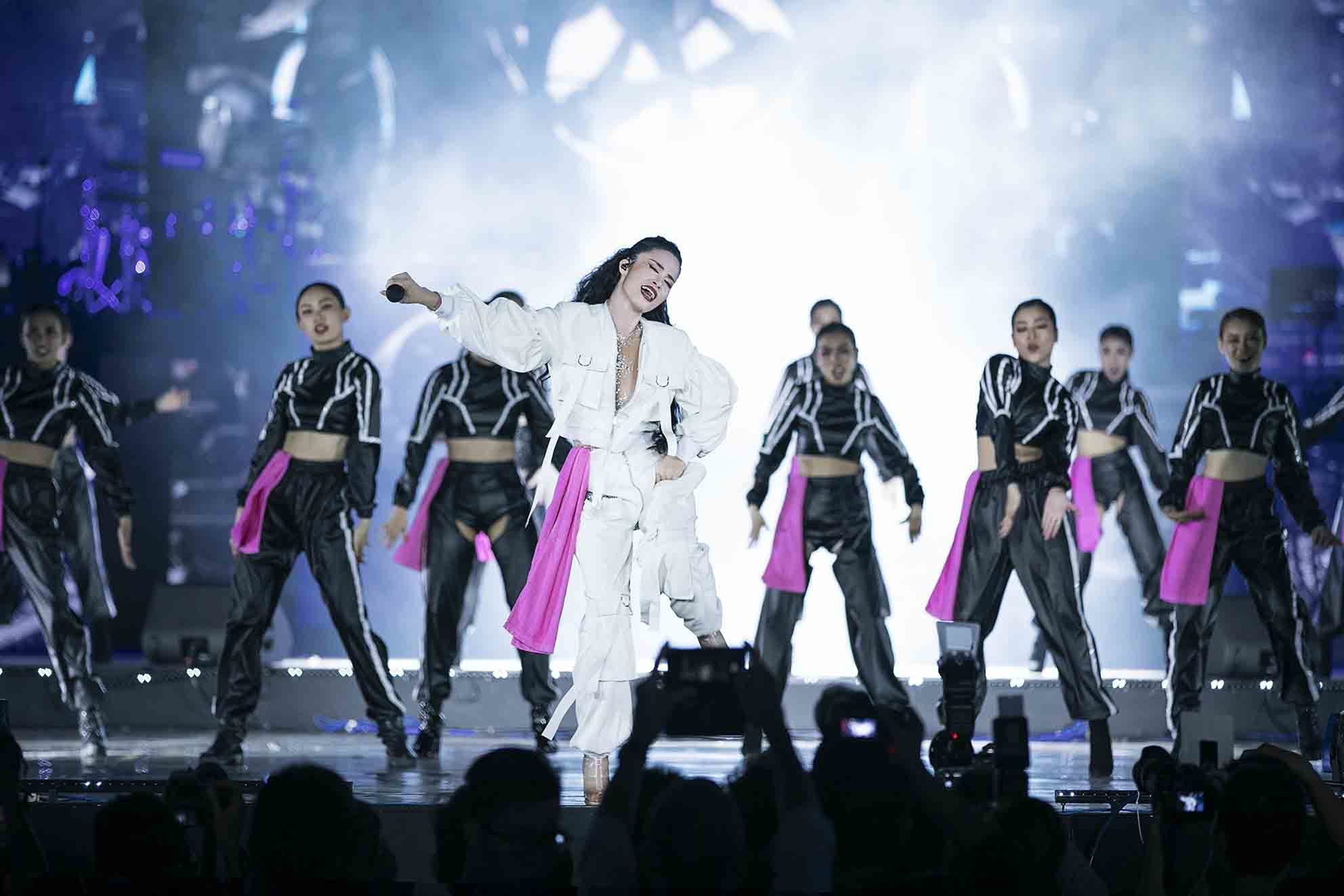 Liveshow will be opened with a temperature that cannot be hotter with a mash-up including Dong Nhi’s EDMs in the past year such as: Xin anh đừng, On Top, Mr Sexy. Nearly 60 dancers and Dong Nhi made the stadium as if it wanted to explode with each melody and dance step, along with the atmosphere became more and more climax with a series of brilliant firework displays. 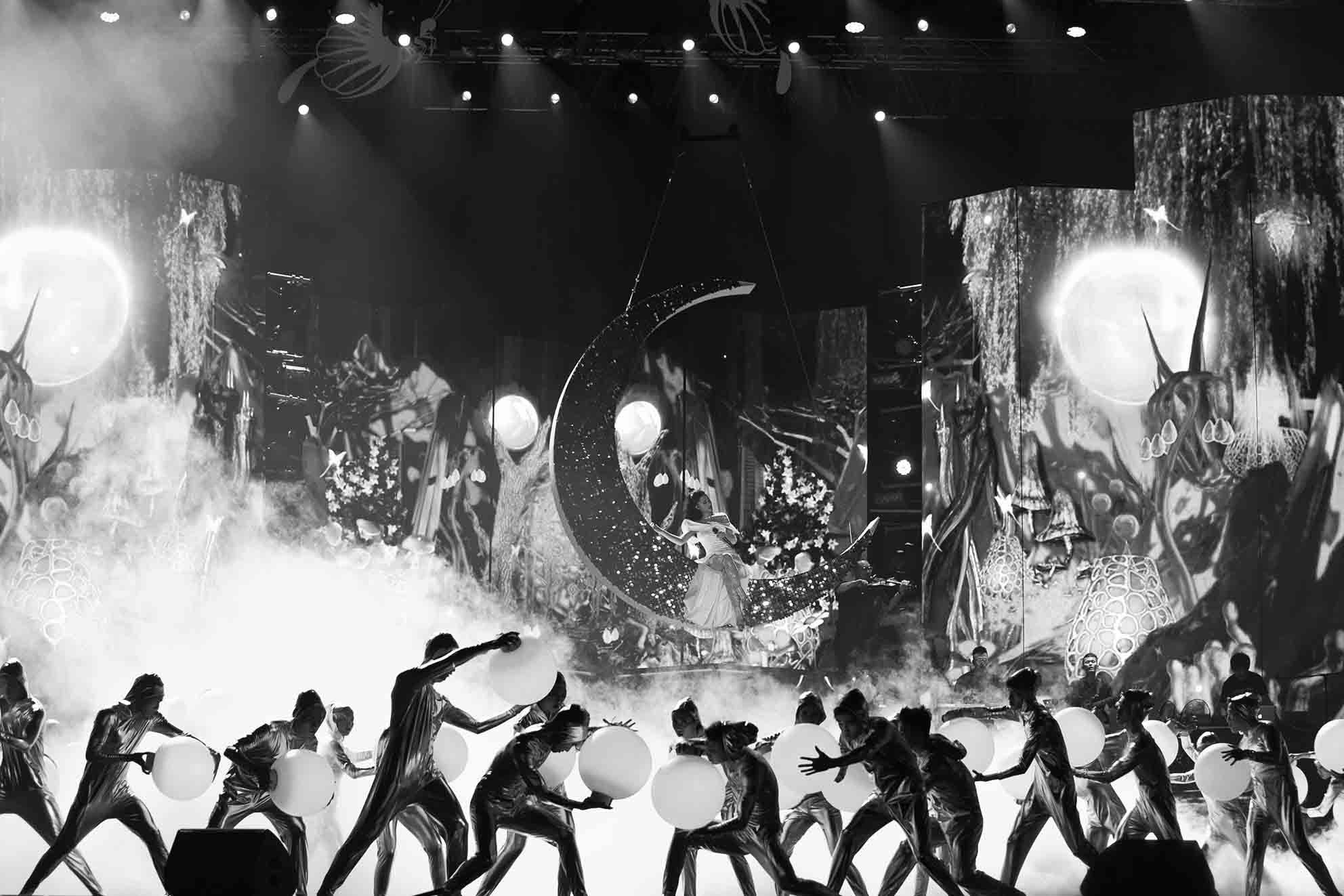 “Ten On Ten” made the audience unable to take their eyes from the opening act until the end of the moment. In the liveshow, Dong Nhi impresses when wearing the fashionable costumes and constantly changing in a short time. 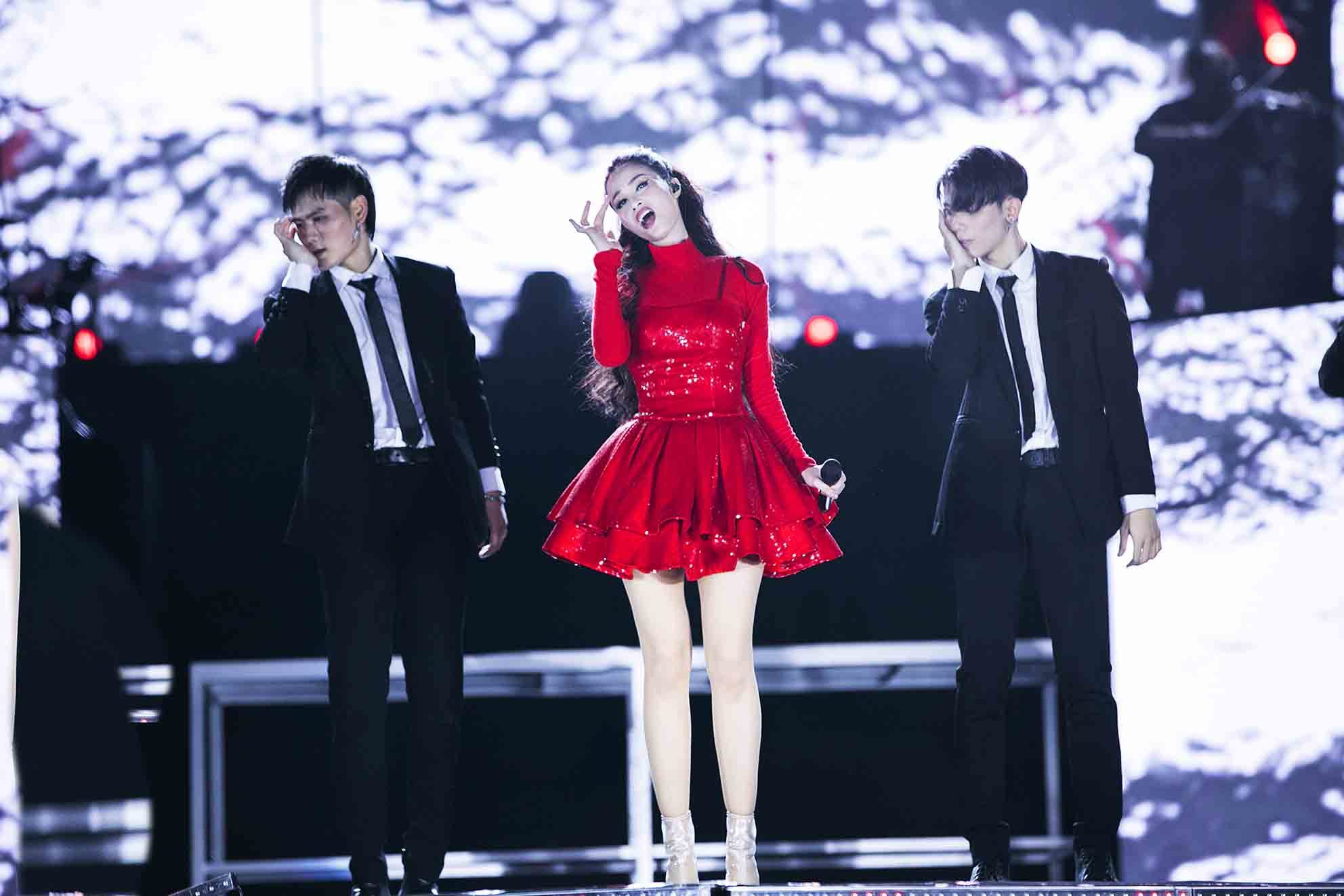 In the next section, Dong Nhi performed for the first time 10 songs in the album vol.3 just released. This is a risk because these are still quite new songs but contrary to anxiety, the audience is extremely passionate and cheers up every new song of the female singer. 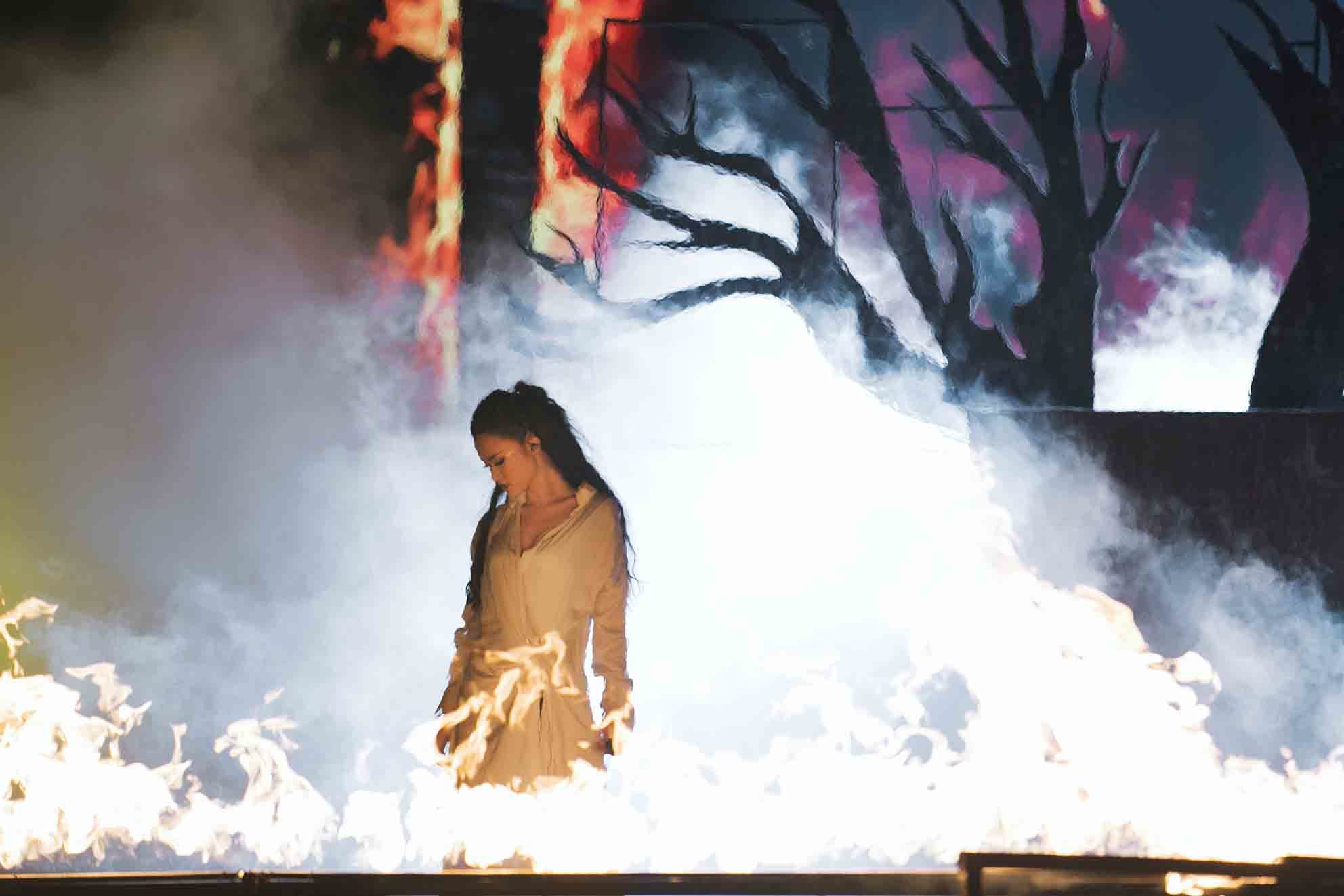 The stage really ignited by the fire on the stage and Dong Nhi’s passionate fire brought to the whole audience. 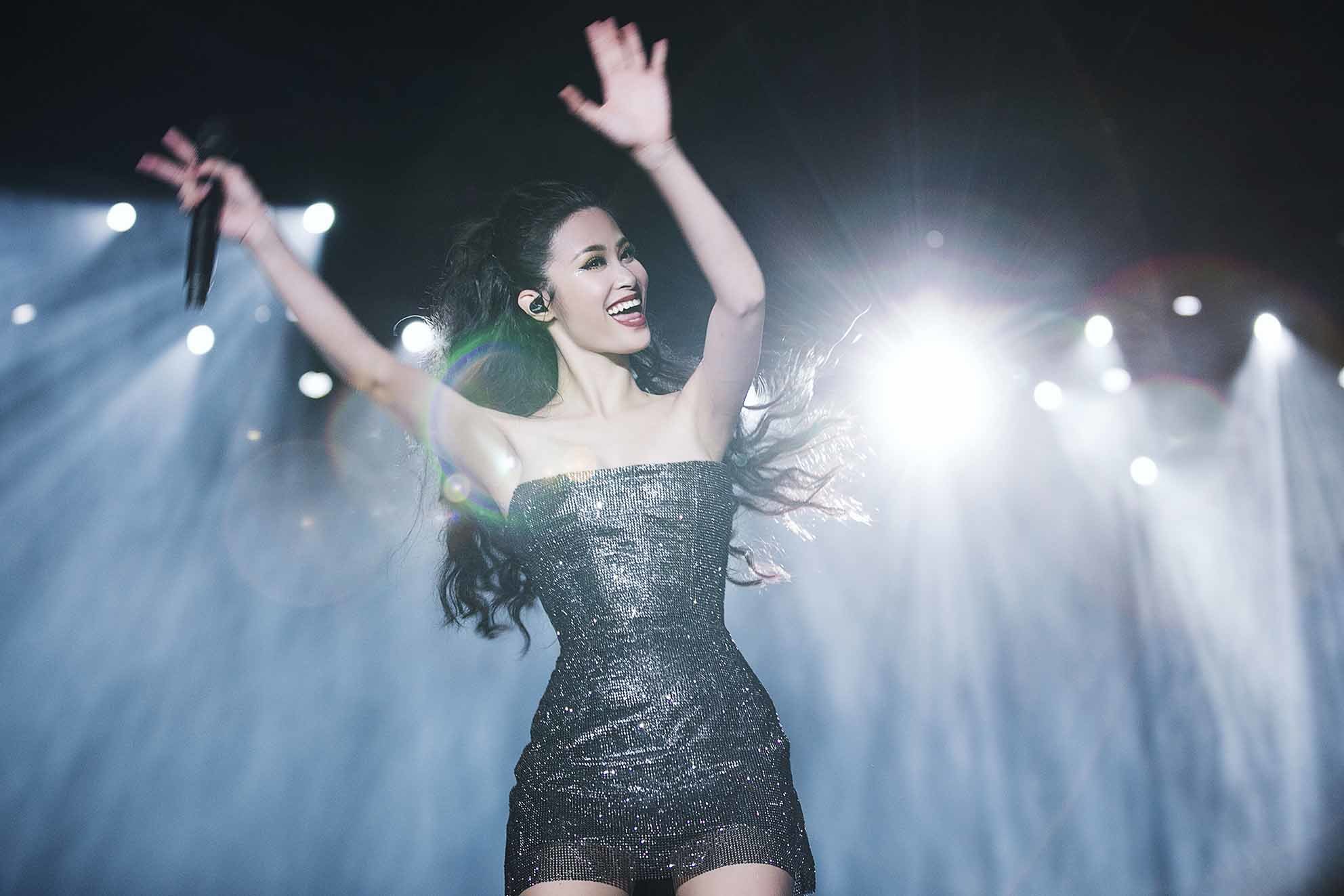 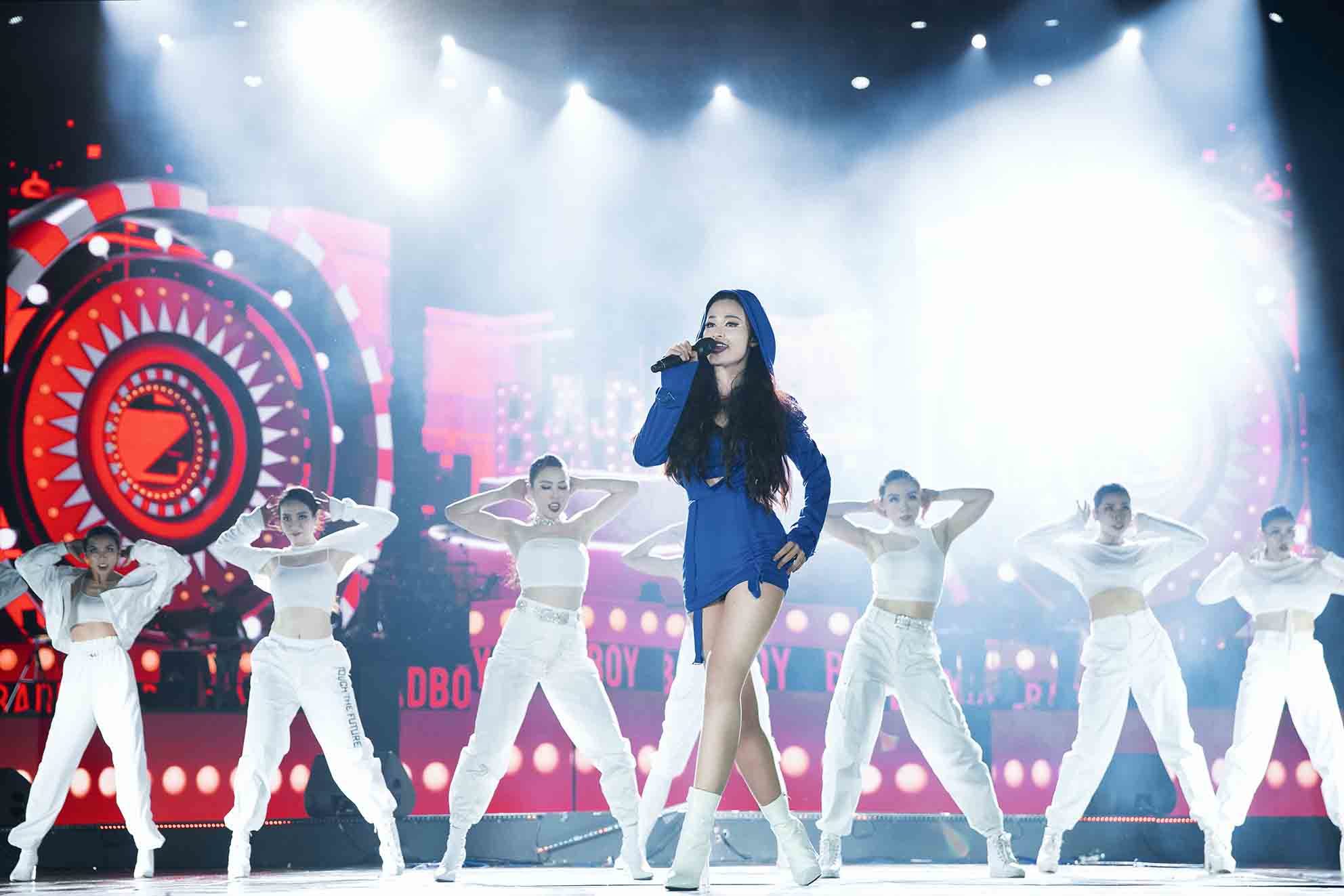 At the end, Dong Nhi returned to burn the stage with a series of EDM series that made up brands like “Bad Boy”, “I Wanna Dance”,”Love Me Too”. The most notable is the long-time female singer who has been able to show off her first Dance music – “Lạnh lùng”. 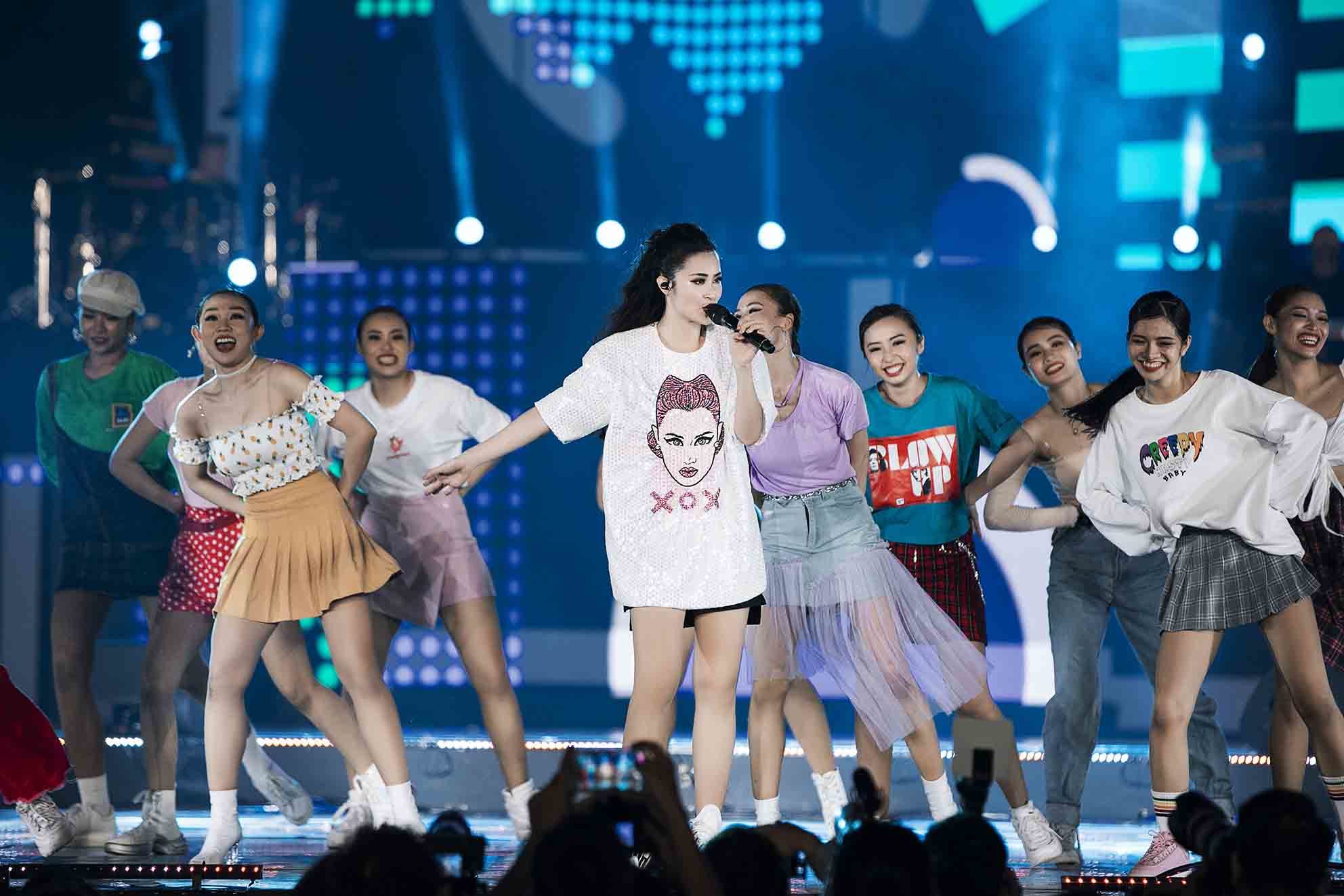 And after that, the female singer brought tens of thousands of spectators back to Dong Nhi’s music space from the first day of singing until before there was a change with the EDM music series through a series of old remixed versions. . The cute setting for this music space also made the audience extremely excited. 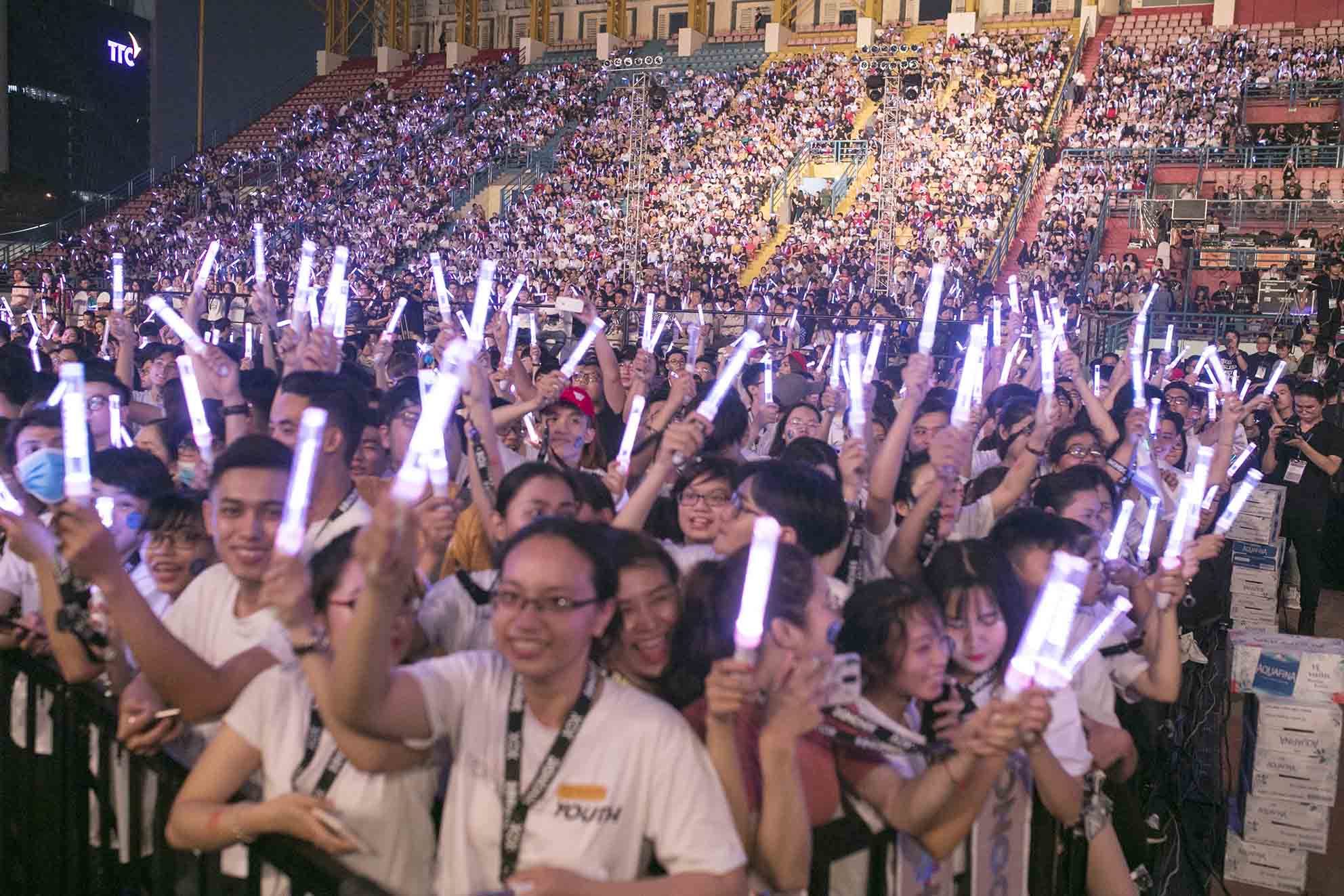 The royal concert night with the participation of 40,000 fans. Especially, the liveshow “Ten On Ten” was played by Dong Nhi to invest in changing the standard color of Kpop model ever. This is also the first time to have a live night using a lightstick to change the color of Vpop. 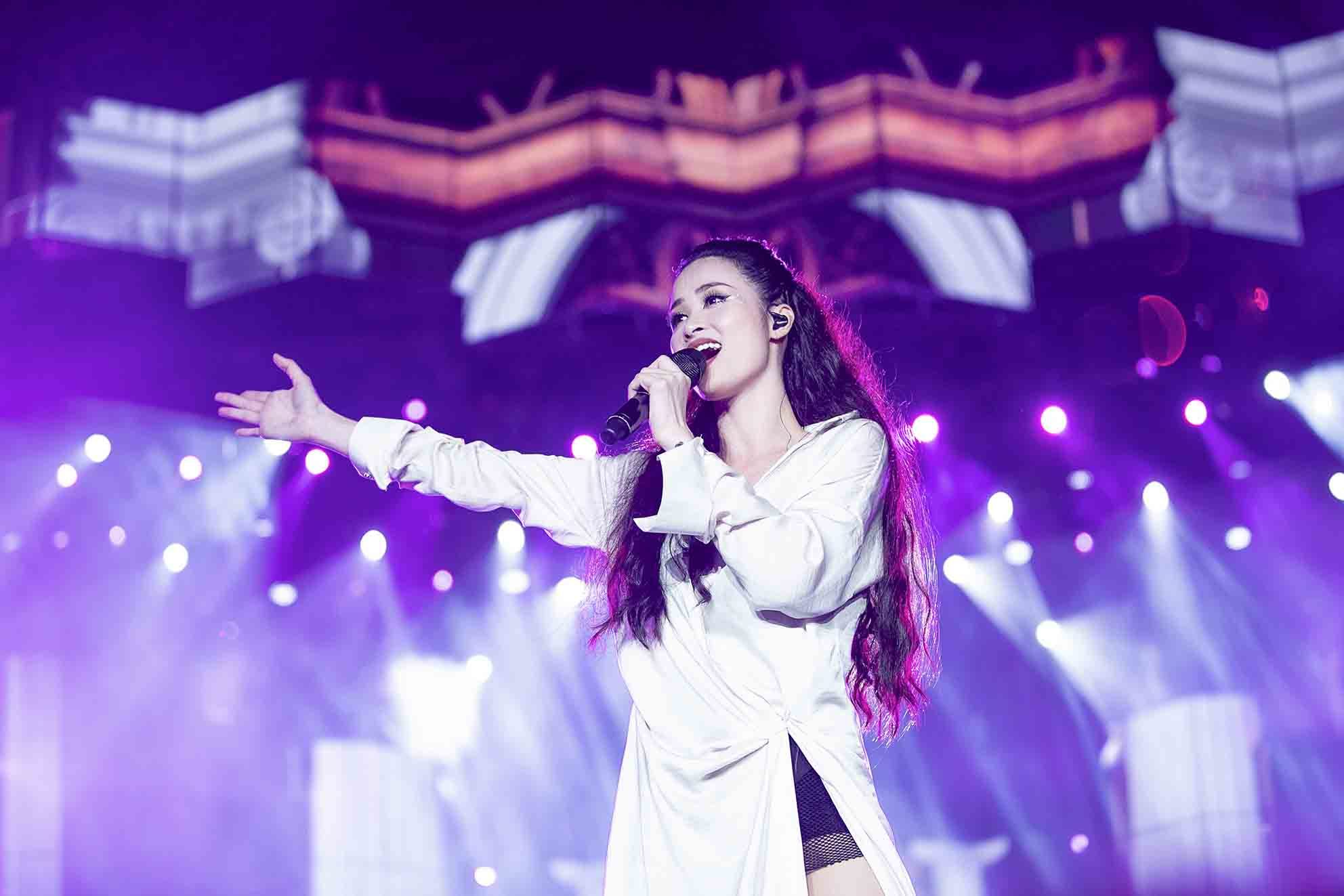 Liveshow “Ten On Ten” is officially closed with an emotional song “We Belong Together”. The voice is more and more progressive, Dong Nhi has once again confirmed its position in the Vietnamese music scene at the present time.

Closing ten years full of memories, Dong Nhi is now able to finish the first chapter of the artist’s life. And the second chapter has just begun in the evening. Whether the new chapter opens more successful, more glorious, I’m afraid we can only ask Dong Nhi’s bravery only. But I believe that the girl is both tough and gentle. Please put a dot at the end of the song, let the Dong Nhi and the big family of Potatoes write more …
90k
views
ShareTweetDaily Motion